Lance Corporal Paulson inserted the captain’s ID card into the terminal. It brought up several options and he selected “shipping manifest.” It took a few minutes to find the crates that were stored in the location mentioned by the survivor. He clicked through the contents of a few crates before finding one marked DAMAGED.

Crate # 61.A12
Contents – SENSITIVE/TOXIC/SECRET, use caution when handling crate. Avoid opening or damaging crate. Do not disclose contents to any but authorized crew on a need to know basis.
Contents - 23 KG of Venenatio Cerebri – Danger, toxic!
Shipper – Esclipse Technologies Corp. Pharmaceutical and Bioweapons Division

The results were relayed to everyone. Some kind of prototype bioweapon had been shipped and the crate had broken open somehow. The most obvious symptom was extreme paranoia and increased violent tendencies. Sykes issued yet another order that nobody was to remove their helmet for any reason. Already Carlson and Morse had removed their helmets, and both had been sedated before they could do any real harm. Kelly had done so at the beginning of the mission but having shown no symptoms he appeared to have gotten lucky.

It was relayed to First Squad that the fusion reactor was overheating due to damage to the coolant system, which they had witnessed firsthand. The former captain of the Quantum Herald had been punching holes in the coolant system for an unknown length of time before First Squad ended his maddened life.

The squads found the stairway which was towards the front of the ship and linked up. They left the sedated Marines with the subs on Oscar Deck and began their work to rescue the majority of the crew which were still in cryosleep on Kilo Deck. Six hours passed with tiresome and frustrating labor inside the bulky pressure suits. One by one, they loaded 46 cryotubes with portable coolant systems to keep them running for up to two days. Then they moved them down several flights of stairs to Oscar Deck where they were loaded into two of the Quantum Herald’s shuttles. The glass of the cockpits wouldn’t stand up to the outside water pressure, but the door to the shuttle’s holding bay was made of steel that would hopefully withstand it. As long as the shuttles could be maneuvered outside of the ship, the submarine could hypothetically tow them out of the blast radius. The timing was the real problem, as the amount of labor involved was intensive and the Marines were already exhausted and at their wits end from the uncomfortable suits. Fortunately, the awareness of an airborne toxin had been enough to stow all thoughts of removing helmets. But they were down to two hours remaining before the fusion reactor would detonate. 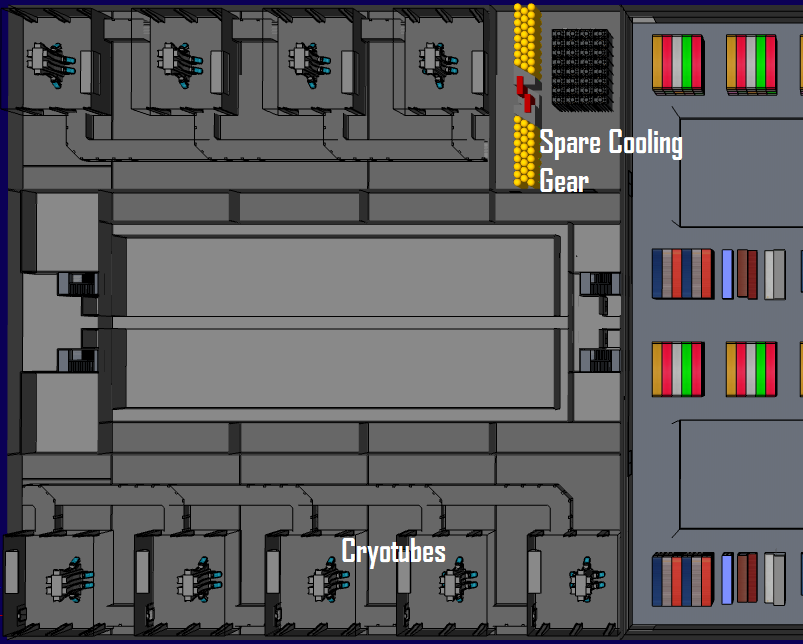 The sedated Marines along with Davros’ civilian friend were loaded into the shuttles where they were guarded by Harper and Williams in turn. The remaining active Marines returned to the main shuttle bay where they collapsed with exhaustion. New squad assignments had been thrown together to make up for the absence of Morse and various other Marines. Sykes barely stayed on his feet but he watched his Marines with detached uneasiness. He knew they needed a break and so he would leave them alone for now, but he would have to get them up in a few minutes. The fusion reactor was supposed to last another two hours but he wasn’t in the mood to find out if that was an accurate estimate.

Suddenly, they heard a voice calling from high above them. The interactive hearing inputs from the pressure suits gave them an accurate estimate of sound location even though it was filtered through a hearing device. “Who are you?! Why have you come?!” Up above, they saw a large man of unclear ethnicity standing on a thin metal catwalk. He had a stubbly beard and a white T-shirt on. “What do you want?!” A large pistol hung limply from his right hand; the kind of pistol that was not allowed on a civilian cargo ship. Something in the man’s tone was unsettling.
(Actions)

(OOC: New roster is posted. Don’t worry, Morse is not leaving us, his character just got hit with bad dice. If any of this stuff is unclear just send me a message and I will explain it. Thanks for your patience!) Henniger sat on the deck plating amongst the other Marines. He'd been reunited with Paulson, his oldest friend in the platoon. Before they caught a few moments rest, he'd asked Paulson to leave his tracker online and Henniger kept an eye on it.

When the mysterious civilian announced himself from above, Henniger hadn't seen any movement on the tracker. He toggled his external mic off and relayed on the all hands circuit.

He tongued the squad circuit and spoke to the new, temporary 1st Squad.

"First up real slow and fan out. Weapons low ready. Don't bunch up in case this psycho has a frag."

Henniger rose slowly. Thankfully he'd been resting with his weapon in the fist of his gauntlet so bringing it to the low ready was less menacing than it could have appeared.

"Sir." He vocalized over his externals. "We are Colonial Marines, we were dispatched to render aid." He figured he'd get him talking and let Morse and the LT take over.

His suit visor gave him a target reticle on the man and he prepared himself to raise his carbine and fire.

Paulson nearly jumped out of his suit, he had just been looking at the motion detector it had shown clear or he had just missed the reading he looked at Henniger and followed his lead by not instantly raising his weapon.

Clint was worn out after they had been hauling the cryo pods and supplemental cooling systems for the remaining personnel of the ship. He was still going through fits of what he could only really describe as claustrophobia, but it seemed to be lessening a bit as time wore on. They had finished loading and were taking a break in the area between the shuttle bays. He was trying to massage a few knots in his back when a voice called from the catwalk above. He rolled to a knee and pushed himself to his feet, moving beneath the catwalk and crossing over to the opposite side that he had been on. He kept his shotgun at a low ready, trying to keep his line of fire so it would not endanger any of the fellow marines.

Sam turned and snapped up her pulse rifle at the sudden appearance of the man carrying the sidearm, but partially lowered it as her fellow marines began to talk to him....

Whispering to her squad mates she said, “Doc, Grisham....spread out slow and easy. Let’s see how dis plays out.”

Darren was heartily sick of the muzzling effect the HARDsuit helmet had on his senses and of breathing his own recycled Body-odor but there was nothing for it but to grin and bear it. He was just checking his suit air supply for the umpteenth time when mans voice echoing from the catwalk above brought him to a kneeling position with his weapon up to his shoulder, ready to fire.
Sgt. Hall's voice crackled in his ear

“Doc, Grisham....spread out slow and easy. Let’s see how dis plays out.”

Darren slowly rose into a crowch and began to move to his left, his finger on the trigger and his aim never leaving the man on the catwalk

Davros rose slowly from his seat on the floor of the Derelict ship. His joints creaked\, and his muscles groaned from the effort after carrying all of those cryo-tubes. He briefly thought to himself "what else could go wrong" as he began to spread out slightly from his fellow marines. He kept his gun at the low ready, doubting he could hit the guy on the catwalk from here with is sub-machine gun with any semblance of accuracy. He took the briefest of seconds to scan their surroundings looking to see if there were any other hostiles in the area. The shadows that played around in the shuttle bay had the hairs on his arms standing on end. He decided it was best for the marines with the longer range guns to handle the man, while he could watch for anything else.

Pulling his motion tracker out he scanned the area making sure there were no other supersizes in the works for them. He was sure there would be all kinds of blips showing up with the marines moving around but if he remembered his training he could discern which blips to ignore.
<motion tracker>
<reactive gun combat if necessary>
<OOC sorry it took me a while to post my turn, all kinds of fun going on here, note the sarcasm>

(OOC): I’m sorry guys I haven’t had time lately. Saturday was my birthday and I’ve been moving into a new place. I’m going on a trip this weekend for a baseball game. I’ll try to squeeze a post in or maybe Morse will do one for me. Thanks for patience)