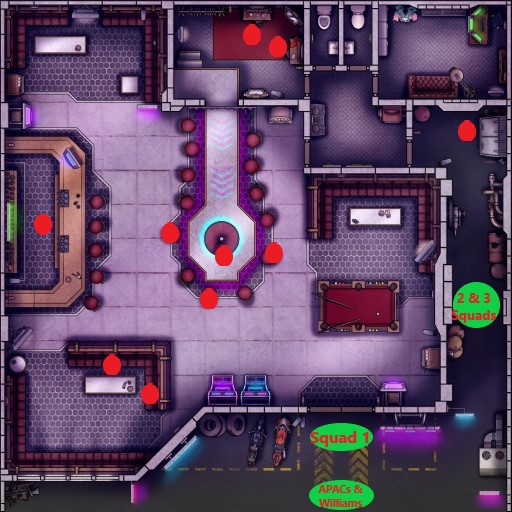 The bar's main entrance burst inwards under the boot of SSgt Morse and 1st squad stormed inside. The floor underfoot was sticky from a thousand generations of spilt beer and the overhead lighting in the large open space of the bar was dim to the point of being dingy. The exception was directly over the central stage where a young lady was gyrating around a pole while divesting herself of her few scanty garments of clothing. A number of locals, slouched on barstools around the stage were watching her performance with bored, loveless, eyes.
Behind the bar, a bearded man was polishing a glass with a rag that looked like it was simply moving the dirt around rather than accomplishing any form of cleaning.

The Bartender's eye's widened in surprise as the Marines came through the door. He dropped the glass and disappeared below the countertop with a strangled yell.
The girl on the stage screamed and attempted to freeze in mid-gyration. The scream became a shriek of surprise as she toppled off the stage into the laps of two of her erstwhile audience, causing all three to collapse to the floor in a tangle of limbs and cheap bar furniture.
In alcoves around the bar, punters were rising to their feet and variously staring shock, raising their hands or attempting to sidle unobtrusively, towards the nearest exit.

Meanwhile, back outside, 2nd Squad and the reinforcement's detailed to them by Lt Harper from 3rd advanced up the alleyway leading to the bar's rear entrance. The alleyway was strewn with empty bottles, cans and other forms of detritus and stank of stale urine. At the far end was a cluster of wheelie-bins and a sharp left turn obscuring the backdoor into the bar. Around this corner, a large, bald, man wearing a soiled chef's apron stepped into view. He was carrying a heavy-looking garbage bag in each hand and heading for the bins while looking back over his shoulder towards the sudden commotion coming from the bar so, for a moment, he didn't see the group of armed soldiers rapidly approaching him down the alley.
MGySgt John Abrams
1st MSF, 2nd Div, 1st Batt 30th MIR
Serial Number: A11/TQ1.95.60390E9
Top

Paulson slowly raised his weapon from ready to aimed, it was unlikely this was one of their men but people did stupid things when faced with guns some times. the man had not yet noticed them in the poorly lit ally but he would shortly.

Paulson tapped a marine to his right and slowly moved ahead with him. raising his voice he called out to the cook just as he turned to continue emptying his hands.

"Stay very still sir! we have not come for you!, lower the bags very slowly and place your hands on your head. drop to your knees once your hands are up i repeat we are not here for you this is just for your and our safety"
Paulson spoke clearly and confidently, praying the man would comply, he was a large man and Paulson wasn't at all confident in mere bean bag rounds.

Clint scanned the interior quickly moving with Doc to the left. He noticed the mediocre looking dancer topple off the stage in his peripheral vision, followed by two patrons crashing to the floor with her. The place was nearly empty, which wasn't surprising given the time was barely after 1000 local time. Seeing that the bartender had ducked behind the counter, he made his way towards the bar, trusting that the others had his back. If this fucker pops up with a weapon from behind the counter he's gonna need some new dental work after I lay him out his internal dialogue started as he gripped the maul tighter.

"You behind the bar, get your hands up where I can see them" he called and then shifter position a few steps over. He weighed the options of keeping somewhat distant or getting closer to the bar and decided on keeping about 3 feet back from the structure. He readied to hold his position, charge ahead or slide forward and to the side for cover based on the barkeep's reaction.

Samantha's nose wrinkled at the smell of urine in the alley, but she continued forward, right next to Paulson, her shotgun leveled at the man coming out of the back-door. She started to open her mouth to say pretty much the same thing Paulson had, but he beat her to it, so instead she kept her eyes and weapon leveled at the chef while calling out to her squad-mates....

"Dmitri, Davros.....either side of the door....open it with Grisham in the center......WATCH YOUR BACKGROUND....no need to shoot any drunk idiots or terrified customers okay.....stay frosty", she ordered while keeping an eye on the 'chef' the whole time....

Watching Paulson take the initiative and seeing that mostly all of them had out their guns, Sokolova slinged her shotgun and got out the maul, wringing it with both hands lightly. Seeing as she hadn't used one of these before, she tried to find the best position for it, finding one hand near the head and the other near the bottom best for now. Turning it on for effect, she stood next to Paulson to give the hint they meant business.

Taking a quick moment, she murmured to Paulson low enough that others wouldn't hear, "I nie have zip ties, but a little tape if he or others start trouble. Ask if you need it."

Danny Sykes followed Morse into the room. He followed his training and shouted orders in his best Sergeant Major voice. "Colonial Marines! Nobody move! Hands where we can see them!" The loud noise of the shouts would stun people long enough for his Marines to take control of the situation. He saw McKenna going for the bartender and so he barked quick and extremely loud orders to the rest of First Squad. "Doc, take those two in the corner," he pointed to the southwest section of the room, "McArthur, check the toilets and back rooms. Morse, take care of these four," he pointed to the dancer and her three tangled patrons in the center of the room.
<Tag First Squad>

The Sergeant Major hopped up onto the stage where the dancer had stood moments before. He could smell the perfume in the air and see the whole place pretty well.
(Roll: Awareness)

Still in the middle of the stage he barked in a loud but less menacing voice, "US Colonial Marines, nobody is going to be hurt! Please comply with us and you will not be in any trouble!" With that he turned and walked along the runway and into the room where the girls must get ready for the show. Women were arguably his greatest weakness, but his mind was focused while on the job. He scanned the room for threats and prepared to bark out more orders if he saw people.

"Doc, take those two in the corner!"

Darren turned in the direction the Sergeant Major indicated, moving quickly towards the corner booth with his weapon up and ready. The gaping muzzle of the shotgun threatened immediate violence if either of the booths occupant's thought it might be a good idea to resist.

"Up against the wall, both of you! hands behind your heads!"

The marines of 1st squad fanned out into the bar, securing the locals as they went. The bartender rose up from behind the bar looking sheepish as Mckenna stood over him, hefting his Shock maul in a menacing fashion.
Kelly had the occupant's of the corner booth up against the wall at shotgun point, ready to be searched while Morse had stood over the tangle of humanity by the stage that was slowly untangling itself. One of the punters took the opportunity to cop a feel of the dancing girl as they clambered to their feet and got a ringing slap across the face for his trouble that sent him back to one knee. In short order, all four were standing in a row by the bar under the watchful eye's of both Morse and Mckenna. The girl was doing her best to cover her naked breasts with her arms and letcher was nursing a bloody nose.
With everything appearing under control, Sykes hopped up onto the stage and moved quickly into the backstage area, heading towards the girls dressing rooms.

Meanwhile, outside, 2nd Squad had successfully secured the man in the chef's apron who was now kneeling in a grimy puddle by the bins with Paulson and Sokolova standing over him. The rest of the squad were stacked up by the rear entrance, ready to make a forced entry on Sgt Halls order.
MGySgt John Abrams
1st MSF, 2nd Div, 1st Batt 30th MIR
Serial Number: A11/TQ1.95.60390E9
Top

Danny Sykes knew he was in a bad spot. He drew back on his training with hostage negotiation. He inhaled deeply and clenched his jaw, hopefully activating his microphone to the rest of his platoon.
<Roll: Agility? Espionage?>

The Sergeant Major spoke in a calm voice, "No problem. I'm just going to set this down on the ground." Sykes knelt very slowly and let his mace drop to the ground. "You're in control here, nothing to worry about. We're all Marines here, I'm Sergeant Major Danny Sykes. We aren't here to hurt you, that isn't our objective. What are your names?" He gave them a moment to answer or tell him to fuck off, gauging their hostility and negotiability. "It sounds like those company bastards did some fucked up shit to you and you deserve better. If I can help you I would like to try. But just take your time to think about what's right here, my people aren't going to put anyone at risk. You are in control."
<Roll: Diplomacy>

This operation was going well as far as Morse could tell. He was half expecting those in the bar to pull weapons and attempt to do something really stupid. Fortunately they did not reach for anything and they were readily stunned by the force of heavily armed and armored Marines that approached them. The irony Morse was found was that the further out in space humanity spread, you could almost have the illusion that the galaxy was sparsely populated. But that was what made operating as a Colonial Marine the best assignment. You did not have to stomach the same nonsense of an Army on Earth fighting terrorists in massive trenched battles for metropolitan dominance. Here it was like the frontier, and they were the righteous hand of the government that all felt free and fear for.

Morse watched as the occupants of the bar were searched, and gave out a simple command.

"If any a yall have a weapon, now's the time to tell it." Morse was not going to think twice in this situation. Overtime he'd come to realize that the authority that Colonial Marines had was rather far reaching and things that happened in the colonies... only mattered to colonists.

He put finger to his com and noted the situation. "Bar Room secure."

Morse called it, and by all accounts it was, but he was ready for that situation to change.

Samantha was happy the 'Chef' seemed to be under control and she nodded to Paulson and Sokolova and said; "Keep him secured while I see what de situation is". She nodded to the rest of the Marines by the door with her and whispered into her Comms; "This is Hall...we're at the Back Door...situation is Secure here....need us to barge in?"